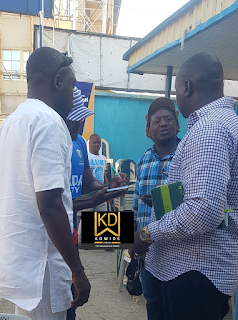 From Left To Right:DJ SCRATCH, Dan Zak , Deezet , Ezekiel . Fixing kaduna Entertainment Industry  Dispute the long persist  Rumour in kaduna about Pman and stakeholders, For years many artist has been putting  things together musically and materially but it seems like the body whom is to be informed or carry the burden  which is pman has not being functioning or they have abandoned  the Artists .KDWIDE  can’t say much about that . But according to the report we got About the pman previous meeting with the main face artist That have come together to fix the industry, The rumours about pman was cleared  out .Deezet who happens  to be the chapter president was faced by Ishaya bivan Who is popularly  known as Dj SCRATCH, Scratch stated in his comments that Deezet Has being forming or being the chapter president over a decade Now how real are you or you are just using artist head,this issue was disclosed at the meet on the 17th of November 2019. Most artist artist were not picking interest on that but KDWIDE suggested on bringing pman National president To kaduna for more details . But With the coming together of DJ Scratch  ,Dan zaki,Ezekiel and Deezet at the end of the meeting . Pman concluded on having an exco meeting on Wednesday  then after fixing themselves, they will get the industry fixed and updates us on Our next general meeting.

[ENTERTAINMENT]:Remedy Set to Drop his First Debut Album/EP Tagged ‘LIFE OF A SOCIOLOGIST’

[Entertainment];Meet the best Blogger in the North ‘REMEDY OF KDWIDE’